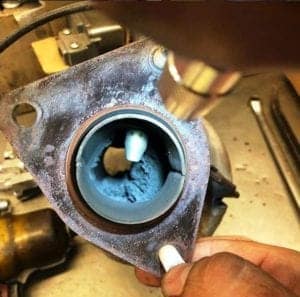 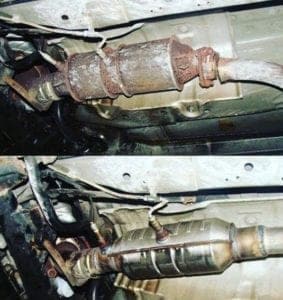 Preventative maintenance is a type of maintenance that is done to prevent bigger and more costly problems. Vehicles come with a maintenance schedule to help you get the most out of your investment. Typically you can find it in your owners manual. Can’t find it? Our repair shop can break down the schedule FREE of charge.

The catalytic converters duty is to remove (transform) environmentally unfriendly gases that enter the exhaust system so they don’t contaminate our planet aka atmosphere. In order for this to be achieved precious metals that are contained inside a catalytic converter which consist of platinum and palladium act as a chemical catalyst which are needed to create a chemical reaction that basically cleans, strips, transforms the toxic gases and turns them into something more environmentally friendly and safe.

Catalytic converters consist of different types of catalysts which have different responsibilities that are required to efficiently make a catalytic converter work. These “catalysts” for one attack nitrogen oxide pollutants through a chemical process called reduction which removes oxygen. This process breaks down the nitrogen oxides and turns it into nitrogen and oxygen gases which are harmless and do naturally already exist within our atmosphere. Another of these catalysts work by an opposite chemical process which is called oxidation, which adds oxygen and then turns carbon monoxide into carbon dioxide for two. Then a third reaction turns the un-burned hydrocarbons in the exhaust into carbon dioxide and water.

Neglecting Tune-Ups – Overdue for an engine tune-up? Have you ever had the spark plugs and ignition cable (wires) changed? When an engine is overdue for a tune-up service, the engine will be potentially be at risk for more wear, tear & problems. When the air-fuel mixture isn’t burning properly, engine misfiring, your experiencing poor fuel economy, all result in unnecessary stress on a catalytic converter. In order for catalytic converters to work correctly the engine must be in good working order hence maintained properly.

If an engine is suffering from irregular air/fuel mixture, improper timing and/or misfiring spark plugs, the exhaust coming from the engine will be affected. Anything that affects the exhaust will in return cause problems with the catalytic converter(s) eventually, over time and in some cases right away. If there is a problem for a lengthy period of time, the catalytic converter(s) can be damaged to the point of needing a replacement. Is it worth saving money now to only end up paying a much larger amount of money later on?

Fuel Contaminating The Exhaust System – If you want your engine to be happy it has to run properly, which requires an accurate air to fuel ratio. When there isn’t enough fuel the engine won’t run properly if at all. If its over fueling, un-burnt fuel can enter the exhaust system which includes the converters. This is one of the most typical reasons that we see catalytic converter failures and is why we flourish in catalytic converter replacement near me.

When this catastrophic problem unfortunately does occur it allows raw un-burned fuel to reach the catalytic converter which then ignites causing it to heat up past the point of its normal operating temperature. In return it melts the catalytic converter’s catalyst together causing the exhaust not to flow, eventually blowing out the catalyst and or your engine dying from the lack of being able to relieve the exhaust gasses.

This problem does cause catalytic converters to fail and then forces consumers to spend a lot of money to replace it which never had to necessarily happen. Don’t break it, maintain it over at the catalytic converter expert Last Chance Auto Repair by getting tune-ups done regularly, replacing faulty parts when needed, like oxygen sensors, fuel injectors, spark plugs, ignition cables and or if your check engine light is on fix it ASAP!

Coolant or Oil Getting Into The Exhaust System – The vehicle’s cooling system is of vital importance to engine health and performance. If the cooling system is suffering from a lack of proper care it’s only a matter of time before the engine starts to run hotter than it should and if your not paying attention this can snowball into a plethora of things that can include cracked manifold gasket, warped cylinder head and gasket problems, cracked blocks, overheated radiators & transmissions, etc. When gaskets go bad, coolant and/or motor oil can leak into the combustion chamber and containment the exhaust system. Coolant and/or oil in the exhaust system can result in carbon deposits building up in the catalytic converter(s) which eventually will end up restricting the exhaust flow, clogging the converters, making one problem transform into a multitude of other more costly issues.

“Check Engine” or “Service Engine Soon” Light Ignored – Has your check engine light been on, for a long time? A vehicle’s check engine and service engine soon light is an important warning system that lets you know that a problem has developed. These lights come on for many reasons. Sometimes the light comes on then goes off, sometimes it stays on and sometimes it flashes. When the light is flashing you need to stop driving it and get the vehicle looked at ASAP. A flashing light means your vehicle’s engine is not feeling well, misfiring, and could potentially severely damage your catalytic converters. If not fixed right away the chances increase dramatically that you’ll end up having to replace the catalytic converter(s).

How To Prevent Catalytic Converter Problems

More About Your Exhaust System

Looking for a #Job, #Career, ?Last Chance Auto Repair is a family owned auto repair business that has been serving #Plainfield, #Naperville, #Bolingbrook, #Romeoville, Chicagoland Illinois area since 1978. We provide full-service, oil, lube, tire, automotive repair & service A-Z.We currently have an opening for a talented, motivated, and energetic individual to work as an automotive #OilChange, lube, tire, #EntryLevelTechnician. As an automotive oil change, lube, tire technician, you will perform oil changes, suspension, steering, chassis lubrication, tire installations and other basic automotive repairs. We are looking for an individual to join our team that can grow with our company, a fast learner, someone that will benefit from our free training which in return will make more money.With growth comes knowledge, training, tools and more money. Some experience is required however we will train the right Candidate. You must have high ethical standards, possess a valid driver’s license, be willing to learn and desire to advance in life. Want to jump into the automotive repair industry? If you think you have what it takes, come join our team at #LastChanceAutoRepair.www.LastChanceAutoRepairs.com12052 S Naper Plainfield RdPlainfield, IL 60585815-577-0327www.google.com/maps?cid=3195904950708136624 ... See MoreSee Less
View on Facebook
· Share

From old to new and everything in between, Last Chance Auto Repair aka best mechanic shop in Plainfield has you covered. We have been serving #Plainfield, #naperville, #bolingbrook, #aurora, #lisle, #Romeoville, #chicagoland, #Illinois plus beyond since 1978 for many reasons.What will be the reason you remember our auto repair shop? Call Plainfield's team Last Chance Auto Repair now, later, 24-7, we have you covered.last-chance-auto-repair.business.site ✔ us out for more information!#LastChanceAutoRepair12052 S Naper Plainfield RdPlainfield, IL 60585815-577-0327#automechanicplainfield #autorepair #autoservice #LastChance #carrepair #mechanic #AutoRepairnearme #classicmechanic #mechanicshop #classicservicecenter ... See MoreSee Less