Does your vehicle have a supercharger or turbocharger? Both superchargers and turbochargers are called forced induction systems.  What is the main purpose of these components? They compress the air flowing into the engine.­ More air means more fuel, so you get more power from each explosion in each cylinder. Which hence equals more power. 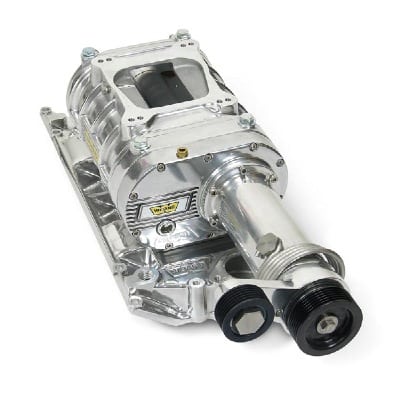 ­The main difference between a supercharger and a turbocharger is its power source. Something has to supply the power to run the air compressor. In a supercharger, there is a belt that connects directly to the engine. It gets its power the same way that the water pump, power steering pump, or an alternator does. Now for a turbocharger, it gets its power from the recycled exhaust gases. The exhaust runs through a turbine, which in turn spins the compressor.

Which One Is Better?

One will not be better than the other since they both have their pros and cons. What it will basically come down to is what are your goals that you are trying to achieve, how much do you want to spend, and which works better for your situation. You have to have a game plan so to say. There are tradeoffs to both systems. In theory, a turbocharger is more efficient because it is using the “wasted” energy in the exhaust stream for its power source. On the other hand, a turbocharger causes some amount of back pressure in the exhaust system and tends to provide less boost until the engine is running at higher RPMs. Superchargers are easier to install but tend to be more expensive. Decisions, decisions, decisions! What’s your best choice?

Over at Last Chance Auto Repair in Plainfield, IL, our team has built a reputation over the years for knowing what to do professionally, knowledgeably, plus affordably in every aspect of the automobile including supercharger or turocharger repair, rebuild, tuning, replacement, services complete. It doesn’t matter where you are Plainfield, Naperville, Bolingbrook, IL. It doesn’t matter what you have Domestic, Asian, European, vehicles complete. Come see our team over at Last Chance Auto Repair will supercharge or turbocharge anything you bring us.

Auto Repair In Plainfield
Thursday, November 10, 2016
★★★★★
“ I had a great experience with Last Chance Auto Repair. I have never needed a real auto shop until now. Up until now, my dad was my mechanic, since I drove newer cars that didn't need more than regular maintenance. I didn't even know the first thing about calling a tow truck. Who do I call? Where do they take my car? My husband's car wouldn't start on a Tuesday morning. After replacing the battery, the car still would not start. On Wednesday morning, I called Last Chance, who has their own towing service. By Wednesday afternoon, tow truck driver Zach had picked up the car. By Thursday afternoon, I spoke with Sheri who quoted me exactly what the problem was and the price. She followed up with a second phone call to tell me that, in order to replace the starter, they had to remove and replace something to get to the starter. The heads up was much appreciated; I like that I can trust this place to contact me before ringing up a bill in my name. I didn't hear from anyone all day Friday, so I called on Saturday afternoon to investigate. I spoke with Ron, whom I spoke to during several other phone calls, but I could tell by his tone that he was definitely distracted and busy. There's a reason he works with cars and not people. Don't let his dry humor or shortness deter you from getting your car fixed here. The car was ready to pick up on Saturday, so we drove over. The garage is tiny, and it seems that there aren't a ton of employees, so if you're ringing their phone off the hook, there probably isn't anyone there manning the phone. It was a little frustrating at times talking to Ron, he always sounded surprised ("we have a Honda Accord here?"), but during most phone calls he was quite pleasant. Zach and Sheri were also very courteous and polite on the phone. When all was said and done, replacing the starter (including some gaskets and something else), plus the cost of the tow truck, minus the 10% off Yelp check-in deal, we spent around $450 - basically a car payment, which is by far better than being strapped with monthly payments.”
- Angela P
Supercharger Verus Turbocharger
12052 S Naper Plainfield RdPlainfield,IL
8155770327$100 - $130 Overall rating: ★★★★★ 5 based on 108 reviews.
5 1
Anonymous