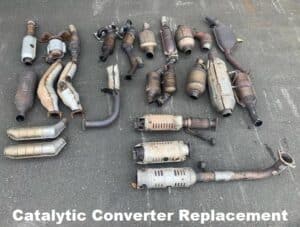 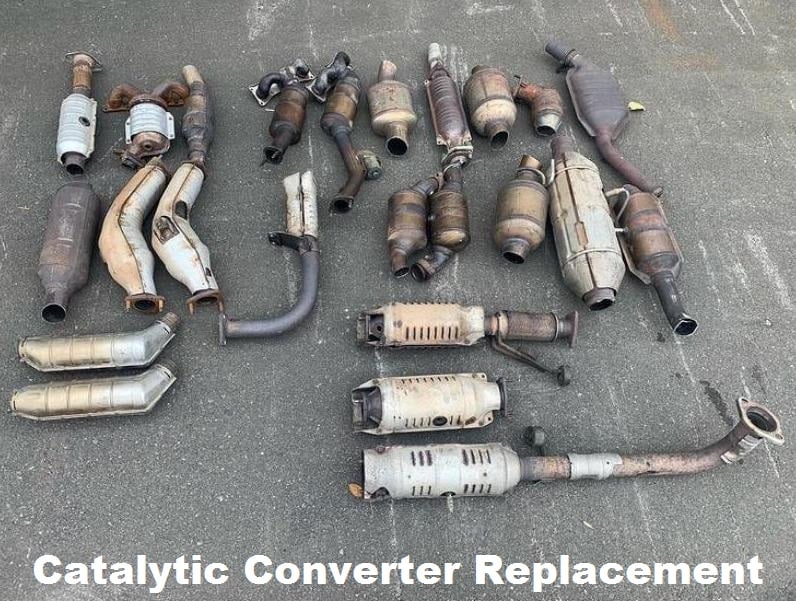 Catalytic Converter Shop You Can Trust

What is a catalytic converter?

Modern day vehicles all come equipped with at least 1 catalytic converter (unless modified) except they all-electric vehicles, which do not consume any gasoline or diesel fuel.

A catalytic converter is the part of your car’s exhaust system that is in charge of converting harmful engine-exhaust gas/pollutants (nitrogen oxides, carbon monoxide, and hydrocarbons) into a less harmful type of gas such as carbon dioxide, water vapor, and nitrogen which is far better for the environment through a chemical reaction that reduces some greenhouse gasses.

The 1st catalytic converter was created back in 1973 at Engelhard Corporation, and widespread production and use began around 1975. Once in use catalytic converters quickly became mandatory equipment on all new cars sold in the United States and many other countries.

The converters contain quite a few different pricey, costly, rare precious metals that include: platinum, palladium and rhodium. The prices of these metals have risen dramatically during the early 21st century and this is behind the reasoning of why they are stolen so often.

If you break down the prices of these precious metals (platinum, palladium and rhodium) by the ounce you can see why catalytic converter theft has grown quite dramatically over the years.

Catalytic converter theft is a major costly problem these days. If you have been the unfortunate victim of a stolen catalytic converter time is of the essence, you should call the police, file a report of the theft and your let your insurance company know what has happened ASAP.

In most cases yes, you may need to pay a deductible, your rates may go up a but if your insurance company will pay to replace it, that may be the most cost effective option at hand.

The best thing to do is to prevent the catalytic converter theft from ever happening in the 1st place. Always try to park in a well-lit area, security cameras work wonders, make sure your alarm system is activated and if you don’t have one install one. To go that extra step now-a-days they have catalytic converter protective shields that an auto repair shop in most cases would have to install but it will prevent most from being stolen. Have you been the victim of a catalytic converter(s) theft?

Looking for a catalytic converter replacement service you can count on, trust & afford? Our exhaust shop has been servicing, repairing and replacing catalytic converters for Plainfield, Naperville, Bolingbrook, Romeoville, plus all surrounding Chicagoland since 1978 and looking forward to many more to come. How can we help you? Call our team at 815-577-0327 today!

Auto Repair In Plainfield
Thursday, November 10, 2016
★★★★★
“ I had a great experience with Last Chance Auto Repair. I have never needed a real auto shop until now. Up until now, my dad was my mechanic, since I drove newer cars that didn't need more than regular maintenance. I didn't even know the first thing about calling a tow truck. Who do I call? Where do they take my car? My husband's car wouldn't start on a Tuesday morning. After replacing the battery, the car still would not start. On Wednesday morning, I called Last Chance, who has their own towing service. By Wednesday afternoon, tow truck driver Zach had picked up the car. By Thursday afternoon, I spoke with Sheri who quoted me exactly what the problem was and the price. She followed up with a second phone call to tell me that, in order to replace the starter, they had to remove and replace something to get to the starter. The heads up was much appreciated; I like that I can trust this place to contact me before ringing up a bill in my name. I didn't hear from anyone all day Friday, so I called on Saturday afternoon to investigate. I spoke with Ron, whom I spoke to during several other phone calls, but I could tell by his tone that he was definitely distracted and busy. There's a reason he works with cars and not people. Don't let his dry humor or shortness deter you from getting your car fixed here. The car was ready to pick up on Saturday, so we drove over. The garage is tiny, and it seems that there aren't a ton of employees, so if you're ringing their phone off the hook, there probably isn't anyone there manning the phone. It was a little frustrating at times talking to Ron, he always sounded surprised ("we have a Honda Accord here?"), but during most phone calls he was quite pleasant. Zach and Sheri were also very courteous and polite on the phone. When all was said and done, replacing the starter (including some gaskets and something else), plus the cost of the tow truck, minus the 10% off Yelp check-in deal, we spent around $450 - basically a car payment, which is by far better than being strapped with monthly payments.”
- Angela P
Catalytic Converter Function And Why People Steal Them
12052 S Naper Plainfield RdPlainfield,IL
8155770327$100 - $130 Overall rating: ★★★★★ 5 based on 108 reviews.
5 1
Anonymous